Very well! Today it's Paolo's turn to take me to work. It is a little nippy (5C, 41F), and there is still hoar frost on the roofs, but nothing on the ground.

Once again I am in my favourite lot in front of the office. Methinks it is probably just a matter of time when I get the first complaint about taking up one full parking spot, because we are five employees and only have four spots... first come, first serve ;-) 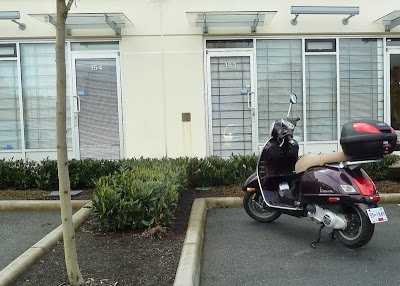 Our offices are not really equipped to accommodate two-wheeled commuters. The server room has to serve me as a changing room , and our unisex washroom becomes my personal powder room to make myself presentable to the public. 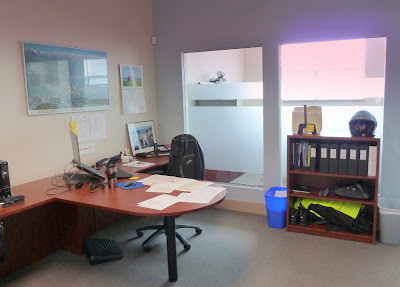 My workspace... since I don't have a locker to store my gear, my bookshelf has to suffice.

I took off early (for my that is 4PM) and roamed through the city. Traffic was dense because of a heavy accident, but eventually eased up in the outskirts, where I enjoyed the mild temperatures sitting by the river. 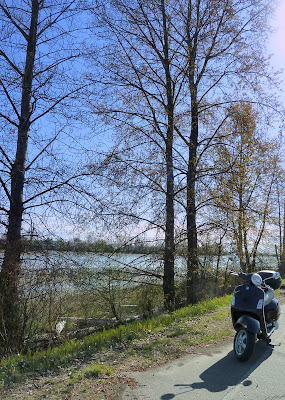 I noted a few little differences between Paolo and Bella, almost like they are indeed different characters. The GTS250 hums, while the GT200 has a throaty voice. The additional 50cc can be felt while accelerating. 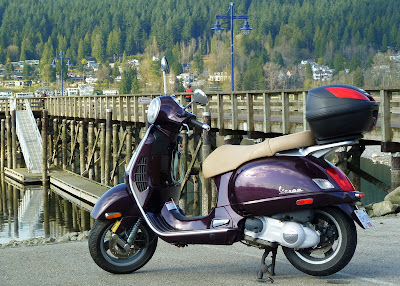 I tiptoe on Bella, while I flatfoot on Paolo. The red one feels more nimble, but the plum bike seem to keep better balance. 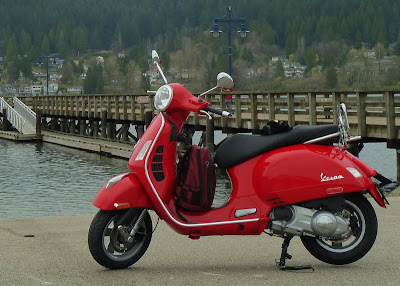 It is really hard to determine which one is the better bike. The GTS250 certainly has the technical advantage through its additional cc's, fuel injection and upgraded lighting, and probably has the better braking system, too. However, I might have developed a little crush on Paolo.
Posted by SonjaM