The Beauty and the Beast

We looked out of the window this morning, and guess what, it didn't rain for a change. So, after the fog and the frost was gone we pulled out the scooter and the Sportster. 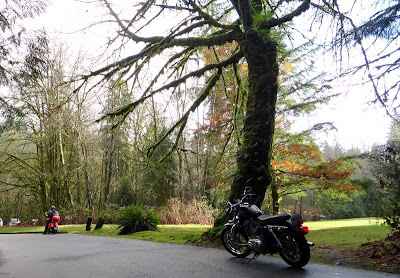 The Harley still carries insurance for another two weeks, while the Vespa is insured all year round anyway. 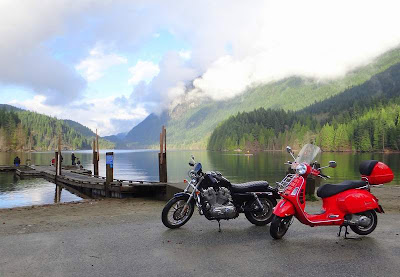 What an odd couple. 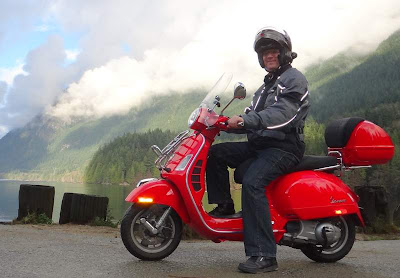 We had 'balmy' 7C (44F). The roads were still wet, so we took it easy, especially with all the muck on the ground. 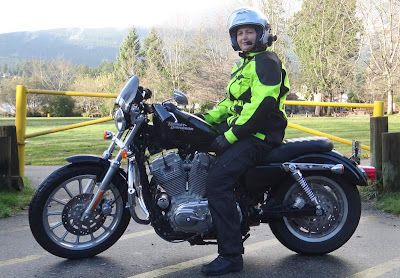 I feel like the Michelin man in all my gear but the layers, as well as the minimalistic protection through fly screen and hand guards kept me warm enough for the two hours we spent in fresh air. 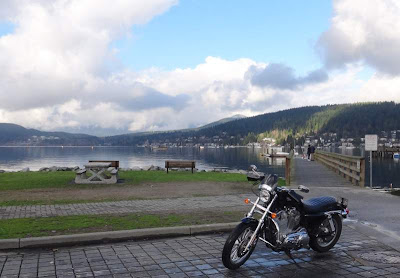 We ended the ride at one of our favorite coffee shops with a (soy) London Fog for me and a Cafe Latte and chocolate cake for my better half. 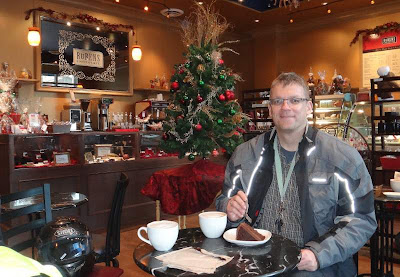 Life is good.
Posted by SonjaM 17 comments: Links to this post

You will be loved!

Miss Love (I kid you not!) came into Paolo's life not long after I had put up the Vespa for sale.

I knew the looks she was giving him.
It was love at first sight.
It was meant to be.
She didn't hesitate, and took him home.
With a big happy smile on her face.
A last embrace, a last round in the parkade for me.
Then he was gone. 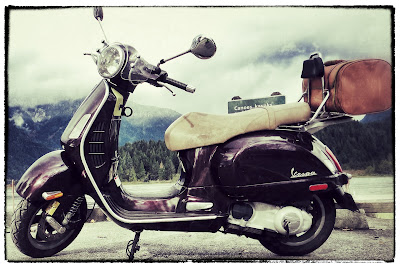 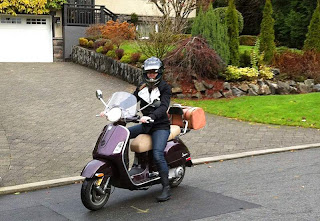 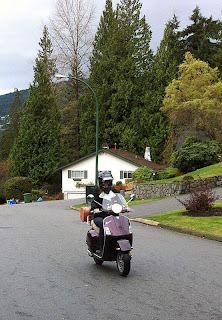 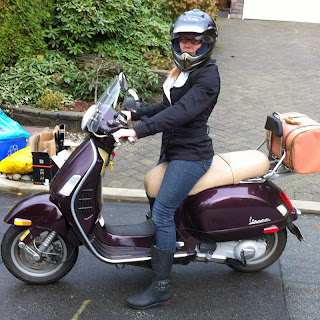 And ready to conquer the world (or maybe Vancouver for starters).
Posted by SonjaM 28 comments: Links to this post

Probably everyone basically knows what a packrat or the more extreme case of a hoarder is. But what is the opposite? I am! I am a minimalist, and will very likely throw out whatever comes in my way of Ordnung. So, besides charity and garbage cans, Ebay and Craigslist are my best friends when it comes to getting rid of (to me) surplus items.

Until recently I wasn’t aware that there is actually a clinical term for this disorder, too. It’s called Obsessive Compulsive Spartanism (OCS) or Ataxophobia. It manifests itself in the need to limit one's possessions in order to keep life simple, organized and under control. I get pleasure out of the fact that my worldly possessions fit in a few boxes, and pride myself in being able to react flexible to any kind of change in life.

The above goes to explain the following. Recently it started bugging me that the husband’s red Vespa hadn’t been on the road as much since he upgraded to Whitey, his Suzuki Burgman 400. Naturally for me it raised the question, what to do with two small scooters, if only one is needed, really. I pondered a lot about the pros and cons of whether to keep Paolo, my 2006 Vespa GT200 or stick with Bella, the 2008 Vespa GTS250.

Both two-wheelers have been equally upgraded; both are mechanically sound and well maintained. Bella however has a bit more power, is fuel injected; it sports a front rack, a higher windshield, and a hard box, plus it has two years and 8,000 km less under its belt. Decision was tough but settled in favour of Bella. Now I need to find a new home for Paolo. There, I said it. I will sell the rugged trusty old battle scooter and continue my commute on the beautiful dragon red Italian diva. 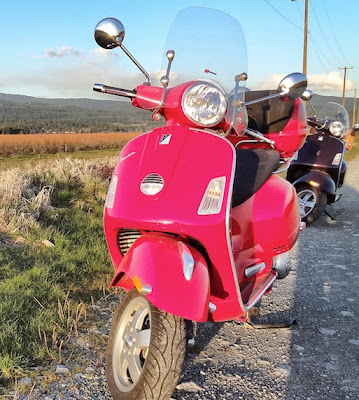 It didn't stop raining for weeks, at least that's what it feels like. I go for a hike, I get wet, I go for a ride, I get wet. I go shopping... you get the picture. 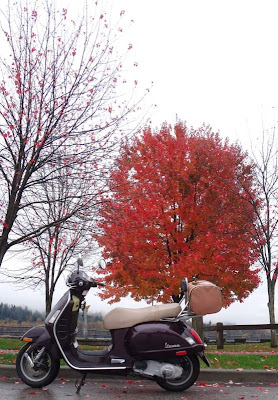 Daylight Saving Time gives me the benefit of an extra hour, which I gladly spend on taking out Paolo for a spin around the block. 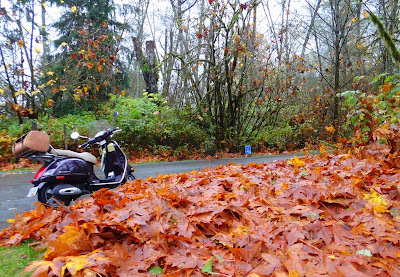 Leaves and water make for a slippery surface. It is just one more road hazard to be aware of come this time of the year. 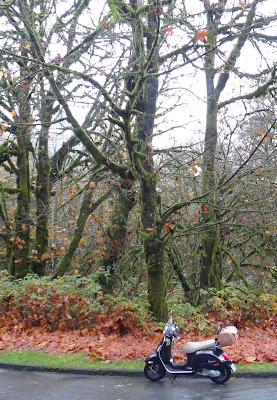 There is moss everywhere, as a constant reminder of the humid air. The naked branches of the moss covered trees seem to want to grab my little scoot. And more of the nasty green stuff on the ground wants to see me slip and fall. 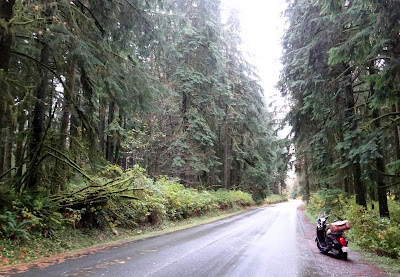 Despite the dreadful grey of the day there is beauty. Empty roads are one of the many advantages of season's ending. And sometimes the clouds part to give way to a nice view on a mountain or a lake. So, it's not all bad. 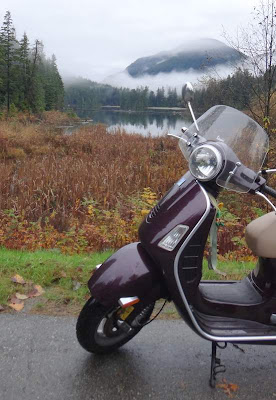 I just wonder why people keep staring at me and my Vespa? Is it so unusual to go for a ride in the rain and have fun jumping through some puddles? This is how I clean my bike. 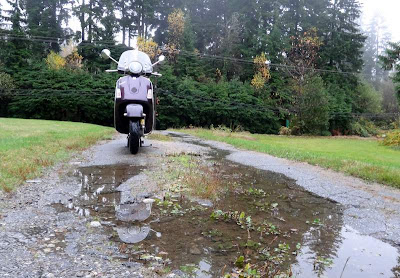 Paolo playing hide-and-seek. Doesn't he seem to fit right in with the colours of the fall foliage? 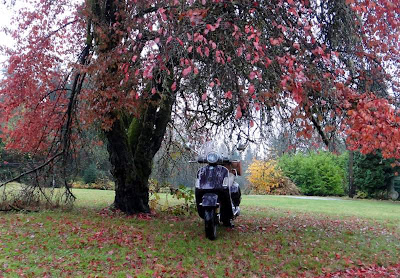 And while I am continuing my journey through the rain with dark clouds hovering I am dreaming... not of a white Christmas, but of dry roads, and blue skies.
Posted by SonjaM 34 comments: Links to this post