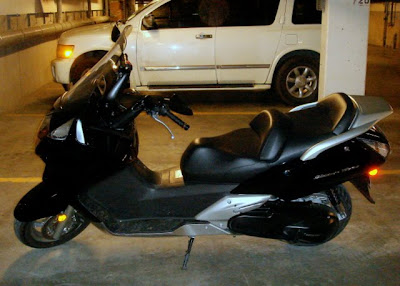 Since Bobskoot posed the question... here's photographic evidence that the SilverWing is still around. After three months of Winter break it is in serious need of some TLC. Also, I might have to take it to the shop to have them figure out why the ABS light stays on even after a few kilometers of riding.
Unfortunately so far my fellow traveler has neither shown a lot of enthusiasm in riding the scooter, nor taken much interest in the maintenance, so here I confess: the SWing's days are counted. I consider selling the bike instead of relocating it to Vancouver. Selling would mean mo' money for the Beemer piggy bank, not selling would mean additional moving cost, but I got a two wheeled ride when I get to the coast... However, I would really like to get that Beemer one day, and well, maybe a small 50 to 150cc scooter only to zip around in town. Not sure yet what to do with that touring-scooter...
Posted by SonjaM 2 comments: Links to this post

Recently I found more pics from a 1998 motorcycle trip of La Route de Grandes Alpes, a highly recommended ride for two wheelers in the Great Alps, with twisties and passes galore. This photo was taken at Col de la Cayolle. 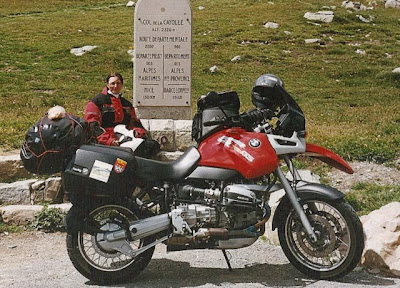 Here is another pass from the French Alps. The Col de L'Iseran is a popular spot, hence we where lucky to get a pic without other two and four wheelers getting in the way. With 2,770m it is the highest paved mountain pass of the Alps, and a Must Do for every Alp rider. 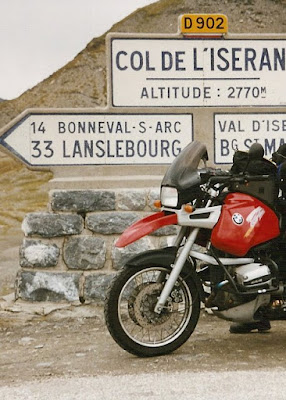 That was then... our (sometimes leaky) canvas hotel. By the end of a tour we would usually get quite proficient in pitching the tent, and also packing in again. I would not want to miss this experience for the world; the winds, the hail storms, the scorching heat, the silence, the fragance of wildflowers, and candle light dinners under clear night skies. Who needs five stars, when he can have a million? 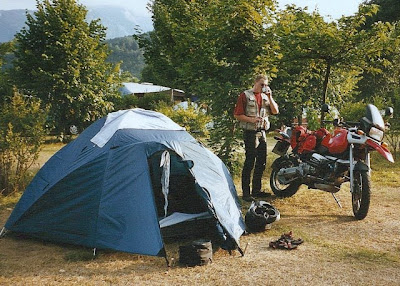 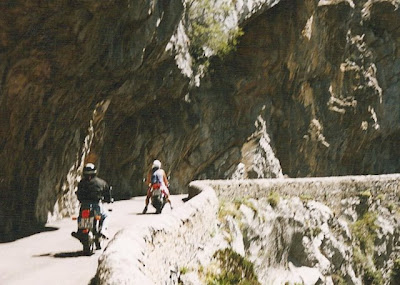 Good food, good wine, and lots of scenic routes. Vive la France! My only regret: I wish I had done a better job at documenting my motorcycle travels.
Posted by SonjaM 13 comments: Links to this post

And that's coming from a female, and a buyer by profession. Frankly, I mostly shop online, even for birthday presents, and I even order them already gift wrapped. Yes, I am an unromantic person that way.
However, I am known to take off for a shopping spree once or twice a year to get all necessities for a new season in one day, choosing the early hours to avoid the crowds. I strongly believe that my lack of shopping enthusiasm might have been one major reason to why my fellow traveler married me.

Shopping at Costco is the worst of all daymares. This afternoon we got stuck in a line-up for card renewal. There are always line ups, everywhere. At the check-out, or the after check-out at the entrance/exit (I will never understand the purpose of this bill-checking-ritual), and the service counter. It never ceases to amaze me why people are willing to wait half an hour or longer only to return the stuff that they had purchased the week before. It makes me wonder why not buy the right stuff the first time, or maybe most of the items are defective by default?

Coming to the point of my story... my fellow traveler sensed my tension build-up, and took me once again to the motorcycle dealership for relaxation (works better than a spa!), where I could admire my 'usual suspects' the Beemer F/G 650 GS and the Bonnie. Jeff, the sales guy recognized me immediately, which he must, since I have been visiting for the umptiest time. We chatted as usual, and what I really appreciate is, that he had never tried to push me into closing the deal.

Although the weather was sunny and balmy -2C (28F), there was not one bike in the dealership parking lot, and not a shadow of a two-wheeler on the road. Albertans are truly heroes of the cold NOT, or so it seems.

Later the day I tried to fire up the scooter, but after a couple of months of garage time it had some starter issues, which actually surprised me, since my LadyHawk used to come to life on the first or second push of the button. The SWing's battery has almost given up the ghost, the tyre pressure is low, and why the heck is the ABS idiot light on all the time? Ok, no riding, instead some maintenance...
Posted by SonjaM 5 comments: Links to this post 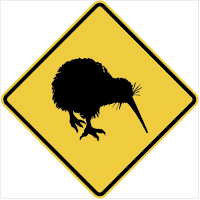 A new job! Call me stupid, but I have by choice accepted a smaller compensation to work for a company, that only recently made their entry into the North American market. I am hoping for much better time management, but more importantly it will be the realization of a lifelong dream, because

a) The North American Headquarter is located in Vancouver (Hello Bobskoot, here I come.);

b) It is the sustainable (renewable) energy sector;

c) Some weeks of training will require traveling to Middle Earth (a.k.a. New Zealand, for those not familiar with the Lord of the Rings movies)

Well, they actually had me at 'New Zealand'... I simply could not resist such a lifetime opportunity to ride another continent. Yes, I have already checked out the possibilities. Depending on the travel budget I plan on renting a scooter, and maybe I even get a chance to rent a Triumph or BMW. I will send a postcard, promise.
Posted by SonjaM 11 comments: Links to this post

Temperatures have reached 5C plus today, so I did some scouting to check out the drivability of the roads. I have counted three brave bikers on the road. All big BMW's. Kudos to them! The melting snow made for some foot deep puddles. 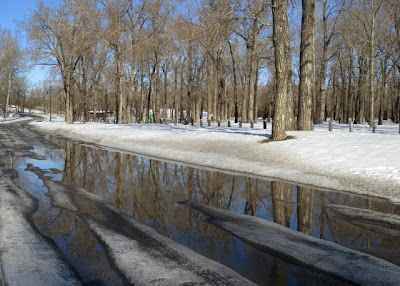 Wish I had a Kawi KLX250 or Yamaha WR205R to play in these road conditions (they are light weight and thus, easy to pick up). Not having a motorcycle makes my wish list longer and longer, but no worries, the F or G650 is still on my mind and in my heart (if it is not one of the Triumph's...). 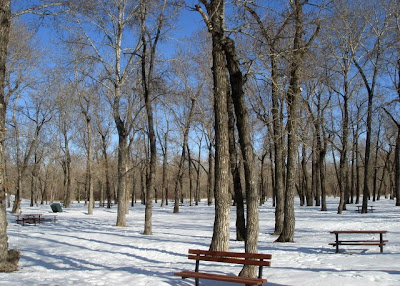 The outdoor folks hasn't returned yet. Parks and picnic places are still empty and the local ducks left undisturbed. A good day for a walk. 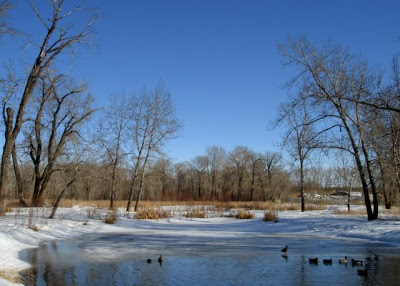 The bikes of my life… so far:

Bikes I haven't owned but ridden on occasion:

Chopper, dirt bike, vintage look, cafe racer, scooter, tourer, naked... I had a taste of almost everything. Shouldn't I know by now, what I really want?
Posted by SonjaM 18 comments: Links to this post

Labels: Memory Lane, My other Bikes

This is one cool bike! 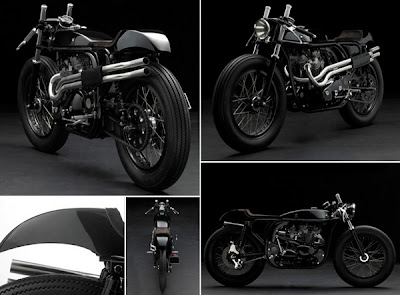 What is it with me and the cafe racers? Only one quick glance, and my BMW plans get wiped out, and all I can think of is British bikes. This time it happened on Gary's Motorcycle Blog, where I discovered a pic of a TRITON. A Norton and Triumph combo, best of breed motorcycles combined.
Posted by SonjaM 9 comments: Links to this post

Jan, the new owner, and I came to an agreement with regards to the damage on the ignition lock, and he drove all the way down from Edmonton today to pick up my Ladyhawk. It is a sad feeling to see her go... like one of your kids leaving home. 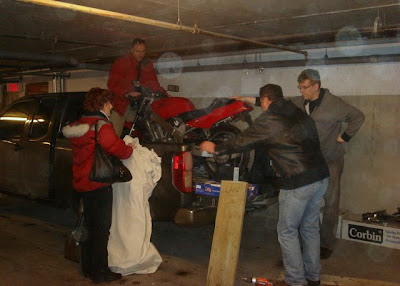 We had some good times together, the Hawk and me. She was patient and tolerant. She never let me down, and helped me gaining back my confidence in riding. I am going to miss her dearly. 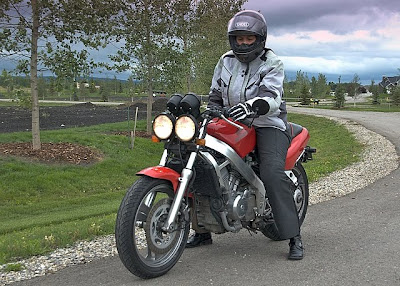 The pic is showing me seven months ago on my first riding day in Canada.
Posted by SonjaM 3 comments: Links to this post

Remember, that I had recently sold my red LadyHawk? We closed the deal, the buyer made a down payment, and I cashed the cheque (to buy my Nolan helmet...). Since Winter weather prevented him from picking up the bike (the guy resides in Edmonton) I agreed to store the motorcycle for a few more weeks in the supposedly safe parkade. Today I went down, to look after her and to remove the dust, like I do every week. Now look, what I found: 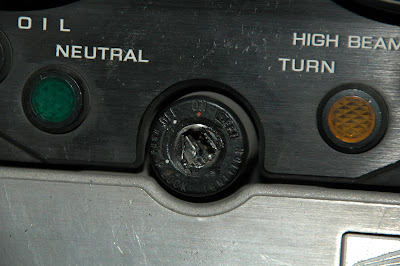 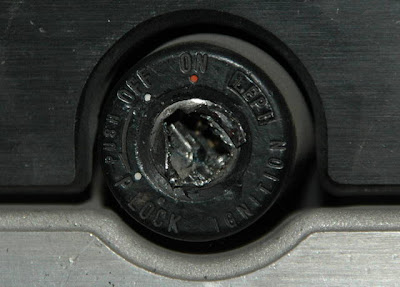 Last week some f@ck tempered with the lock (probably a screwdriver?), and destroyed it, obviously with the intention to steal the bike. Why it hasn't been taken, I don't know. Maybe the perpetrator(s) were interrupted. I am so upset about it. Not only because the deal might be called of, but also because the replacement of the ignition lock alone sums up to approximately $300. I am not sure yet if any other damage exists, and I will leave it up to the repair shop to take care of the poor old lady. Since I have to invest quite a bit money in the Hawk now, I am almost thinking of calling the deal off, and to keep the bike...
Posted by SonjaM 5 comments: Links to this post 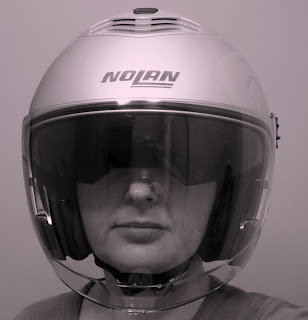 Three weeks after placing the order my new anti-claustro brain bucket has finally arrived. The color is silver. It fits right to size (S). The weight is a little higher than anticipated for a 3/4 helmet, but nothing to worry about. The visor adjusts smoothly, and the inbuilt sunshade covers my eyes perfectly. Now I am curious to take it out for a ride in the wind to test the air drag and the noise level under road conditions. Be gone already, Winter!

Meanwhile, my fellow traveler had a blast with my helmet hair. What's so funny about it? 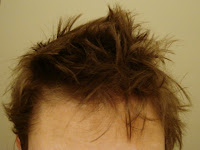 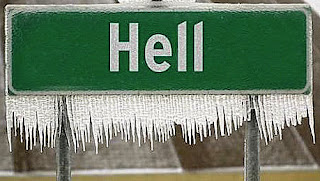 I had high hopes to be able to earn back my badge as an all-year-rounder in my first year of revisiting two-wheelers. I kept riding into November, but then weather and work became allies against me. OK, I rode pillion in December, that might account to something. Alas, January came and went by, and my mileage count is a big zero for the month.
The weird thing though is, it would have been achievable, since southern Alberta occasionally gets nice little breaks from the Winter when the Chinook winds kick in and start messing with the white stuff. But unfortunately I was not able to be around to cherish those precious moments, and go out for a ride, no! Instead I was stuck in Winnipeg all January long. And on weekends... it snowed again.


I have to remind myself to stop whining now, I gotta pack my bag and get back to Manitoba, get back to work, get paid, and save up the bucks for a new bike...
Posted by SonjaM 8 comments: Links to this post