Usually I do not react to anonymous comments. Most of them only deliver spam, and are forwarded immediately into my friend Oscar's little hideaway:

However, in this case I am going to respond. Some Anonymous has left a new comment on my post "IMBC 2012 - Recap" asking for advice.

How did you install the Sena to that Nolan n104 helmet? Did you use the adhesive mount Yes! or is it possible to hook it up using the clamp mount? No! If you did use the adhesive, does it stick properly on the helmet even tho the surface isnt "glass like" on the matte helmet? Yes!
Does the boom-mike reach in front of your lips even tho the main unit is installed a bit more back than required? No, but close enough. It doesn't seem to matter, people can hear me loud and clear. If you could please inform me on these issues. I have Nolan N104 and am thinking about getting that Sena set. Some people at forums said that its impossible to hook the sena on to that helmet. It is not impossible but inconvenient. Nolan did a good job making it almost impossible to use other comm devices on the N104. I didn't care as below pictures prove, and I like my SENA SMH-10. It's the best imho. 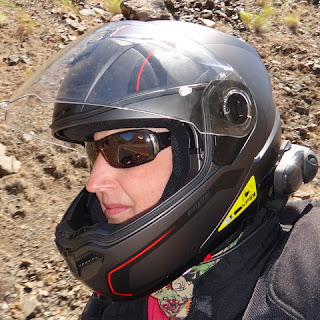 Positioning of the SENA on Nolan N104. 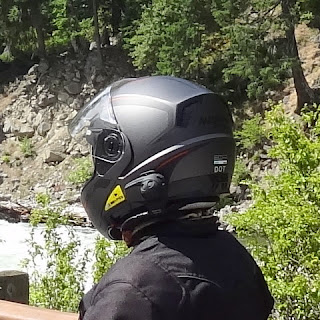 Mounting position seen from behind. 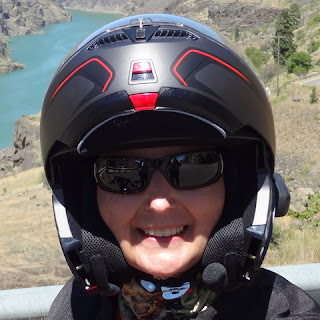 The boom is close enough to allow proper communication.

Dear Anonymous, I hope that my amateur explanation will help with your selection. Next time that I need to shop around for a new helmet I would rather not buy a Nolan helmet but stick with SENA.
Posted by SonjaM 9 comments: Links to this post

The weather was promising: Sunny and 7C (45F). With Bella, the dragon red Vespa GTS250 now being the only two-wheeled vehicle in hour household with year-round insurance, hubby suggested we could double up.

Vespisti Wiki: Double up (adverb) - to share a scooter meant for one person.

And hubby geared up. He was serious about this! In the beginning I wasn't feeling very comfortable with not being in charge, but that changed quickly. Roland was in full control of the vehicle. 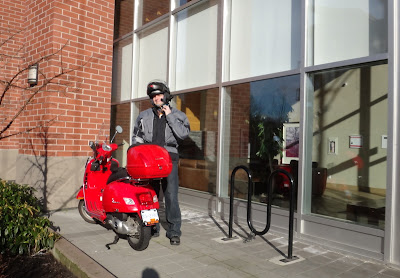 All, that was left for me was to relax and enjoy the ride (and take some action pics). The Vespa was happy to play outside, and the three of us had a wonderful outing. 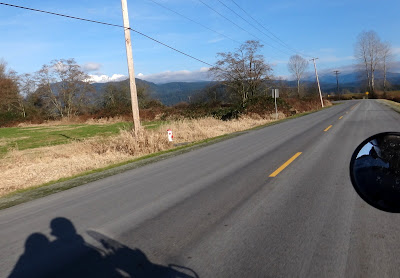 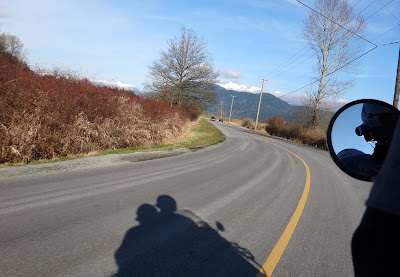 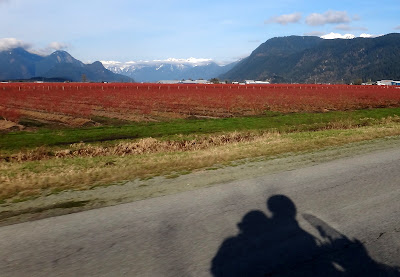 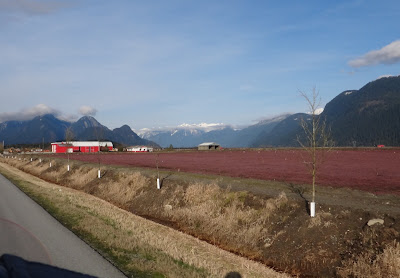 We haven't seen many two-wheelers but some boaters, bicyclists and hikers. Also, we had our share of stupid female (!) SUV drivers. One was a very bad SMIDSY (sorry mate I didn't see you). Luckily Roland anticipated the move of the BMW X5, he kept the scooter in check during the braking maneuver, and made good use of our Wolo Bad Boy horn. Can you say 'jump'? The startled lady almost went into the ditch but we were safe. I hope she learned the lesson. 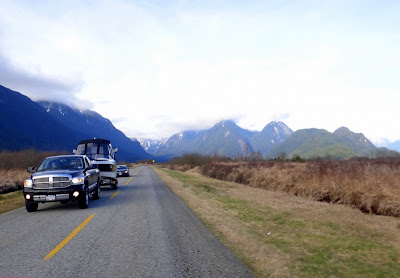 The other situation was a SMIDSYBIDC (Sorry mate I did see you but I don't care): The female Nissan cager forced her way in by undertaking us on a merging lane, so we had to slow down for her. Needless to mention that there was lots of room behind us. But she needed to be ahead of us, that stupid cow. 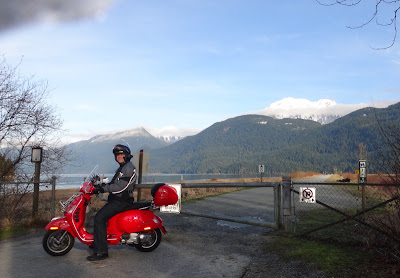 Anyway, we made it there and back without getting hit or seriously in peril. When it comes to bad driving it was just another day in Canadian traffic. 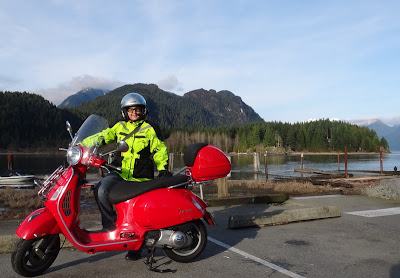 Back in town we treated ourselves with a nice hot beverage and gluten-free muffins at our favourite (non-franchise) coffee place. 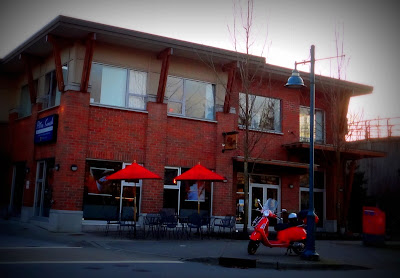 A happy ending to a gorgeous day. Life is good! 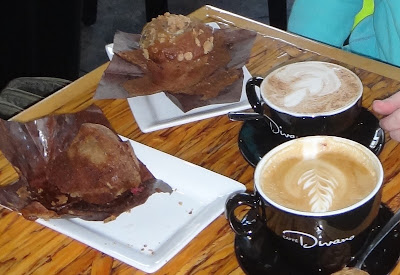 A Tasmanian on the Road

Once upon a time there was a young lady from Tasmania. She had very ambitious dreams, such as riding from Alaska to Tierra del Fuego, and she thought that she had found the right bike for the job when I sold her my Nella, the BMW F650GS. 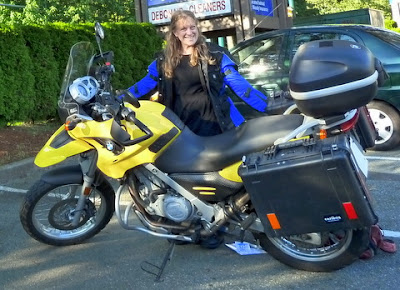 Detective Bob, a closet adventurer himself, recently discovered Deb's postings on the ADV-Rider Forum, and found the bike looked familiar. Thank you, Bob, for finding her. I couldn't believe how far Nella and her new rider had already traveled.

Dreams coming true. Accompanied by her Dad Deb got her 'bike legs' in Alaska. And Nella got to see the world. 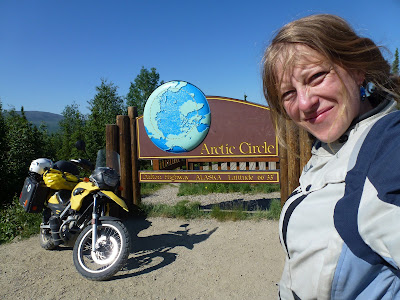 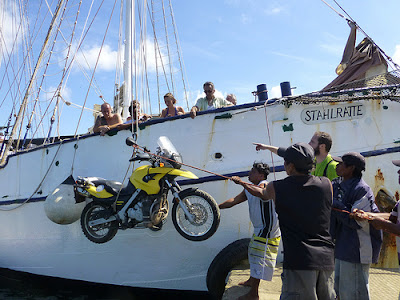 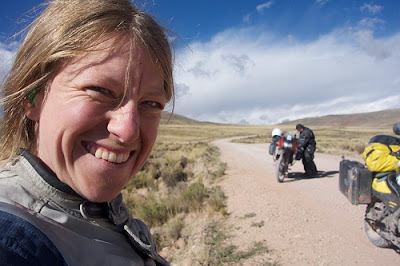 Pictures courtesy Deb, thanks for allowing me to post these. Save travels, and keep the shiny side up! Her Blog can be found here.
Posted by SonjaM 12 comments: Links to this post

Punxsutawney Phil's Canadian counterpart Wiarton Willie is also predicting an early end to this year’s erratic winter after it failed to see its shadow this morning. And we all know this hairy creature's prognoses are always true... 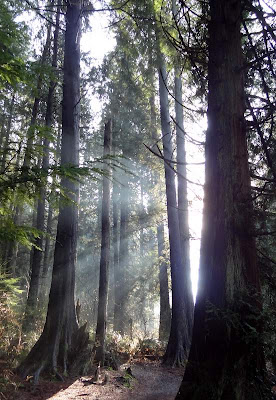 We went to see what the this rodent is talking about and look what I found: 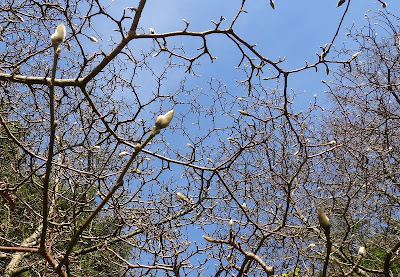 After the fog was gone, Groundhog Day turned out to be a lovely day with temperatures well over 10C (> 50F). 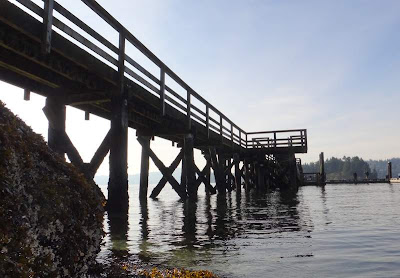 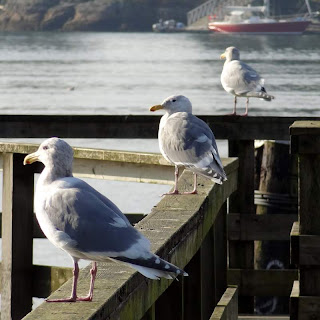 Besides my usual bird watching activities, I had the rare opportunity to capture a harbour seal that was as curious about watching us. 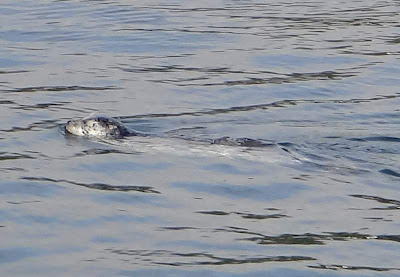 I was tempted to get out the scooter for a quick ride around the block but it didn't happen thanks to a pinched nerve in my back which was bothering me for the last two days. So I walked, and it simply felt good to be outside. 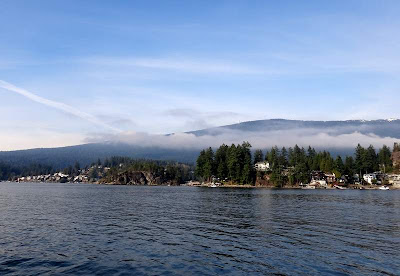 No problem with Spring coming early this year!
Posted by SonjaM 8 comments: Links to this post

A Pop Icon and a Vespa

Well, there I admit it, I am a kid of the 80's. That was back then when the music really sucked. 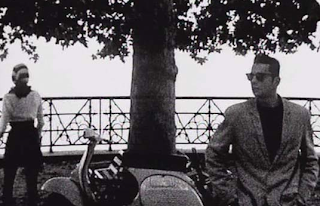 I mentally survived this decade of acustic failure by listening to more "exotic" stuff like Ska, Synth or New Wave (That was before they called it Indie). Bands like The Cure, Depeche Mode or The Police helped me keeping my sanity. And there was this Krautrock called Neue Deutsche Welle (The New German Wave), Kraftwerk anyone? 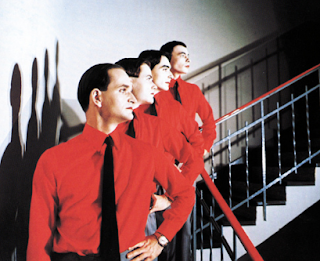 Nowadays I listen to music that is so far away from mainstream that it usually doesn't make MTV (does this actually still exist???) and is only randomly found on YouTube. Exception is probably the occasional Emo song, which we called Dark Wave back in the days, but I degress.

Anyway, for reasons unbeknownst to me (I don't have kids that I need to impress or to protect from bad lyrics) I occasionally keep up with the contemporary music scene, so I happen to know about Our Madonna of the new Millenium a.k.a. Lady Gaga. 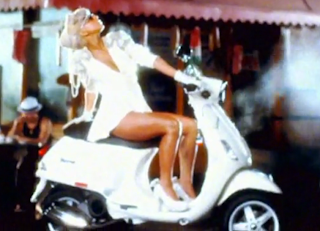 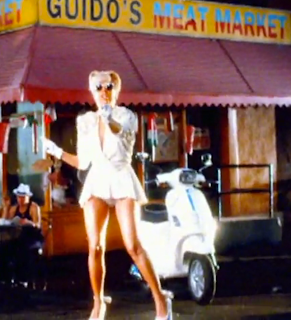 ME: HEY! (I had to shout...) Excuse me? (In normal tone).
(Kid removing one earplug, music now blaring out of the plug for sharing.)
KID: HUH? (not yet adjusted to her indoor voice). 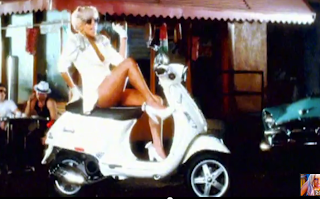 ME: Pretty cool music (Thinking, is saying 'cool' still cool? I am not used to having conversations with kids.). But it's a little loud. Would you mind turning down your Lady Gaga song a little?
KID: (Big eyes, her mind trying to compute that middle aged woman identified contemporary pop culture). It's my favourite. It's got to be loud.
ME (nodding): I understand. How about you finish your song on your terms (Thinking: and don't start from the beginning, and I'll strangle you if you dare looping it.), and turn it down after. What's the next song on your playlist? 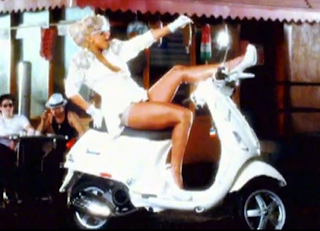 KID: Kesha! Die Young!
ME (almost ready to throw up, forcing myself to smile): You know what this song's about?
(With iPhone at the ready I google up the lyrics and come across these poetic lines: It's pretty obvious that you've got a crush (you know) That magic in your pants, it's making me blush (for sure)
KID: Noooo, don't care. (KID re-plugging her ear and dancing away)
ME (shouting after her): Better don't get caught singing the lyrics. Otherwise Mom's got some 'splaining to do...

Point of the story: The Lady of Gaga is known to work product placement as props into her spacy videos (something's got to pay for the otherworldly outfits), and in one of them she was doing ot on a VESPA, I mean the singing and the dancing of course.

Suddenly methinks, the 80's weren't so bad after all.
Posted by SonjaM 31 comments: Links to this post