ABCD - In quest for the perfect line

Here is my contribution to the 1st of May Blogger's Centerline Day with hubby doing 'The Stig'. The road chosen is called Tum-tumay-whueton Drive, named after the Tsleil-Wauluth First Nation word for 'home'. Quite fitting I thought, since this beautiful piece of blacktop happens to be only a few minutes away from my home. 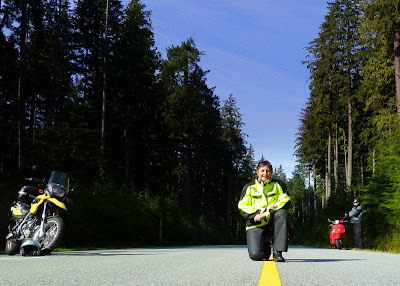 I didn't dare to sit down, traffic was unusually high, so I needed to be at the ready to jump out of the way. Thanks, Gary. What a great idea!

The main reason for being on two wheels today was the official announcement of May as the motorcycle awareness month. Various clubs had invited to meet in the Historic Downtown of New Westminster for brunch and a ride. In the beginning Nella felt a little lost among all those cruisers. 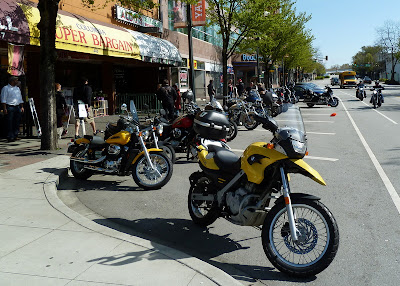 New Westminster is a motorcycle friendly community, offering free parking to riders, and the owner of Heritage Grill sponsored the event by offering a full breakfast at only 7$. What's not to love. 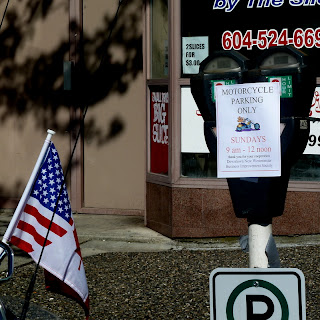 It filled up quickly, more Harley's, Victory's, and Indian's, and some Rice Cruisers, but Nella remained the only Beemer in the lot. 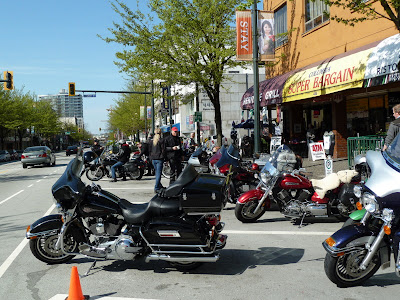 Officer, I didn't do anything... The event was also supported by the police, and the female officer was quite interested in Nella, since she is in the market for a - as she called it - 'retirement bike', a lowered BMW F800GS. 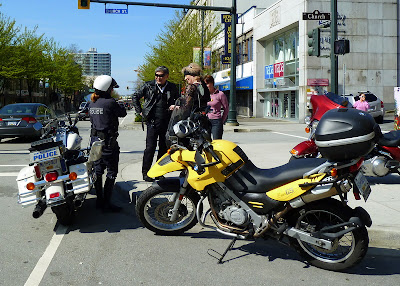 We chatted about the differences of our two bikes, and in the end she offered me a seat on her Harley Police bike. If the picture only included a center-line... this could actually have been my ABC for today. 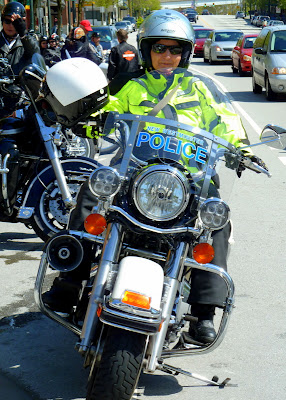 Home again, and getting ready for yet another trip to the Midwest... Flint, Michigan. Hence, no riding for me in the next few days.
Posted by SonjaM