Most certainly I was not born to ride. In fact I hated bicycles, especially pedaling uphills. And from where I used to live, everything seemed to be uphill. A neighbor's son, Lothar, introduced me to the advantages of motorized two wheeling. I rode pillion on his Honda Monkey, and I had been a rider's back warmer ever since on many other occasions. For a long time I was happy with sitting behind, until my brother talked me me into getting my own motorcycle driver's license. Maybe he was just fed up with me asking him all the time, if he would take me for a ride.
Taking the classroom courses was mandatory but boring, since I had my car driver's license for several years. Needless to say that I passed the road knowledge test with flying colors. Also, I took 12 hours of safety training (eight hours were mandatory) on a Kawasaki Eliminator ZL400 during the Winter of 91/92. I only remember that it was dark, cold and wet most of the time and I had poor equipment. I passed the road test in April 1992, which got shortened because of sleet.

My new bike was already waiting in the garage: An almost new Yamaha Virago 250. 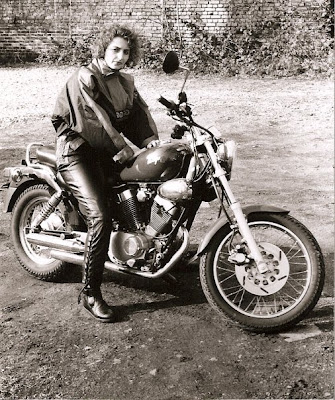