The weekend greeted me with a bag of mixed weather. We (that is Roger's family and I) had spent the morning watching Taylor play soccer, or football as they say rightly so in this neck of the woods. Unfortunately her team lost but heck, can the girl run! She was faster with the ball at foot than most of the taller players of the opposing team.

Later the day I spent a couple of hours walking the shoreline despite wind and rain, and enjoyed the salty breeze. I am a fish-head born in Northern Germany, and any kind of salt water works like a magnet on me. 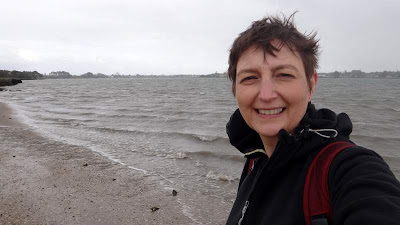 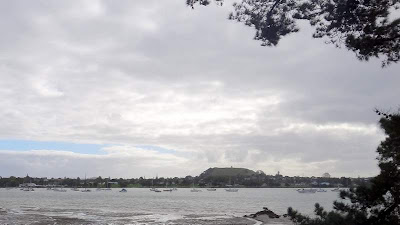 Thanks to the Wet Coast experience back home, the weather didn't bother me at all, and I went barefoot anyway. 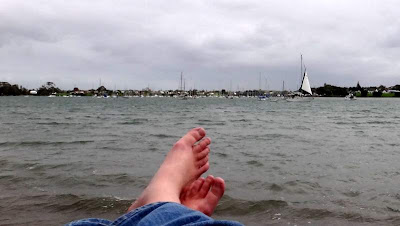 Refreshed and hungry like a wolf I returned to Roger's place attracted by the distinct mouthwatering smell of lamb on the barbie to be accompanied by a mix of kumara and potato fried in duck fat, and a gorgeous gravy. 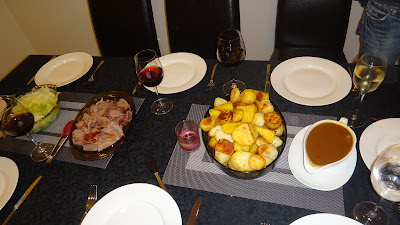 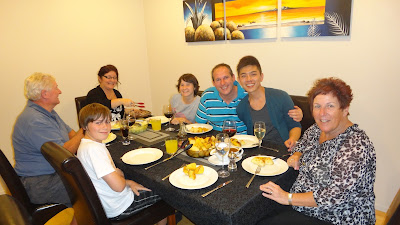 Here's the whole Fleming family around the table. From the left, son Nathan, dad Ross, sister Stacey, daughter Taylor, Roger, partner Terry and mom Val. There is no doubt about from whom Roger inherited his wit and humor. His parents took every opportunity to expose his childhood mishaps, and bonus (!) now I know all about expired cake and old age sex... I certainly had a good chuckle mostly on Roger's account. You had to be there.
Posted by SonjaM